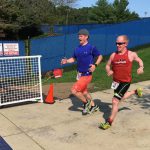 Ironman Chattanooga was called off by Dougie and I this year, leaving a hole in my triathlon calendar. I decided to fill it by racing the Reston Triathlon with my youngest brother in my hometown.

The Part About the Bike Box

I don’t have a car and therefore had a slight logistical problem. I needed to get my bike to Reston for the race. I love public transportation and so immediately ruled out renting a car. This would have been an expensive option as well. Train tickets were pretty reasonable, and seeing as how I love train travel I made this my chosen mode of race transportation.

To get your bike on the train (or a plane) you need a bike box. I was going to use the Evoc softcase, which is a pretty sweet setup. It is very lightweight and has reinforced edges and the bike frame itself locks into a separate metal piece. There are wheels as well, making it ideal for city travel.

I took the day off work and left to catch a noon train on the Friday before the race. Abbe and I got the bike down the stairs fairly easily. She wasn’t joining me on this one as she had other plans in the city she needed to be present for. As I said goodbye to her I then stood looking at this massive situation I had to maneuver through the NYC Subway. I said out loud to her that this seems like a bad idea. I had done a lot of research on getting the bike on the train and knew I had a 50/50 shot of being successful. “Screw it, I’m going for it.” and off I went.

I did pretty well getting it down into the Second Avenue Subway, two people even helped me get it through the emergency access gate. Everyone was quite curious about my luggage and asked lots of questions. People were very shocked to hear that you can just sign up for a triathlon and not ‘qualify’ to participate in them.

Going up the stairs is slightly more challenging. Thankfully, a woman helped me get it up the stairs at Herald Square. Go New York!

Arriving at the illustrious Penn Station I had an hour and 15 minutes until my train, enough time to deal with any other BS I might come across. I found a lovely conductor lady and quizzed her about my bike box, asking what the odds of me getting this puppy on the train were. “Pretty good if you pay the large luggage fee of $25. The line is empty, go ahead and get it taken care of.” You bet I will, as I ran over to the empty kiosk. The woman working the desk was not impressed with my chipper ‘I’m excited to get on a train’ attitude. “Hi! I need to get on a train with my oversized luggage.” “That isn’t making it on any train aside from the 3PM bike train.” she replied. “But, it’s just a big bag, not a bike.” Clearly I had a bike in there. The graphics on the side of the bag that said ‘Evoc Pro Bike Bag’ made it a dead give away. I asked and pleaded as to what I could do to get it on the train. She basically told me I was on my own and if I could convince the conductor trackside to take it on board then so be it. “That’s it, that’s all I can do?” “Yep.”

I knew that the trackside people would also be less than thrilled to see this bag, as my first conductor friend told me so. Emergency Action Baker has just gone into high speed mode. I was going to get a cab to my apartment, drop my bike off and cab it back to Penn in an hour to make my train. I would figure out the bike part of the race once in Reston, but for now I needed to make this train.

It was 11AM  and I was in a cab headed north on 8th Avenue, not a fast ride. It didn’t help that homeslice was watching movies on his phone at stoplights. I actually made it to my place by 11:30. Abbe ran down and helped me repack my luggage before I ran off towards Madison Avenue.

I made a game time decision that the subway was a better option to inject me into Penn. I took a cab across the Park to the A, C, E at 96th and jumped underground.  It was 11:42 when I boarded the C train.

At 11:54 the doors opened at Penn and I bolted out full speed. I had this.

I quickly made note of my track and bee lined it to the closest entry point. I sat down with 2 minutes to spare before the train doors closed. Mission complete. Bike bags suck. I was a sweaty mess.

I had a lovely train ride down and was glued to the book I was reading for book club, Underground Railroad. I highly recommend it.

On Saturday Jeff and I went out for a shakeout run followed by a 20 minute bike ride. Oh right, what was my bike solution? My brother Phil lent me his road bike. Thanks Phil!

We went and checked into the race and then bounced around town with Ali and Dylan. That night we went to Phil and Naomi’s house for pasta dinner. We had shrimp scampi which was delicious.

I was up at 5-5:30AM and felt pretty good. Jeff and I watched the news while sipping coffee. Hurricane Irma was hitting Florida at the time so we were concerned for our Mom.

We rode over to set up T2 (Jeff lives across the street, quite literally, from the finish line and T2) making it super easy. It may have been the silliest T2 setup I have ever done. Since I had Phil’s bike, and he doesn’t have clips installed, I would be riding it in my running shoes and in my running gear basically. I looked at my T2 spot and just placed 1 Gel on the ground. The people around me looked at me like I was insane.

Next, we rode over to T1 on Lake Audubon. It was pretty chilly out with the air temperature being 50 and the water temperature 72. I enjoyed the fact that this is a very hometown race, where everyone knew everyone. There was also some serious competition present.

I was in Wave 2 and so I fist bumped Jeff and made my way to the lake. I waded out to the start buoy and hung out for a hot second. The water was pleasant but not warm by any means although I knew I would heat up once we started swimming.

The gun went off and I dug in. This was the second time I had swam this year, the first being the NYC Tri in July. It’s like riding a bike right?

I was thoroughly enjoying my morning swim. The sun was rising and it was looking like a beautiful day. The lake also brings back memories for me. I learned how to sail on it when I was 15, at a time when i was also scared of the water.

I did get blasted in the face once and had my goggles pop off.

I knew my swim was slow because I could feel a few waves pass over me. When I exited I saw Jeff, who had beat me out of the water. I yelled over to him “Jeff! Go!” I then scrambled out of my wetsuit, dried off and hopped on the bike. By now Jeff had a solid 2 minute lead on me, which is a pretty big gap on the bike.

The course was 3 loops on back roads. The first few miles it took me awhile to get into gear. Once I did I picked up the pace and started having some fun. I saw Phil, Naomi, Cayden, Owen, Ali and Dylan all cheering with signs at mile 5.

One of the things that started to happen to me was that I was getting major hip pain after mile 10. I would say that has to do with me riding a bike that isn’t fitted for me. I was also struggling with not being clipped into the pedals. It would be tough for me to catch up to my brother.

By the time I finished up my third loop the sun was beating down and turning up the heat. I dumped my bike, grabbed my lone, sad gel and took off.

The run was in the woods on paved trails, a staple of the Reston community. Luckily, it was also very shaded. Mile 1 clicked off at 7:11, the hunt for Jeff was on.

I saw him coming my way after the first out-n-back, roughly at mile 3. We high fived and I yelled that I was coming for him. I took my gel at mile 4 with my pace hovering in the 7:15 range.

I finally caught him after we went up this torturous half a mile hill. We ended up running the last mile or so together which was pretty fun. I also saw my friend Jenn run by! I had no idea she was racing. I later texted her and learned that all my buddies (Shag, Rick, Albers, etc.) were hanging out. Unfortunately, time was not on my side and I couldn’t go join them.

Finally, as we got to the finish he was like “Let’s go!” and we blasted across the line simultaneously! 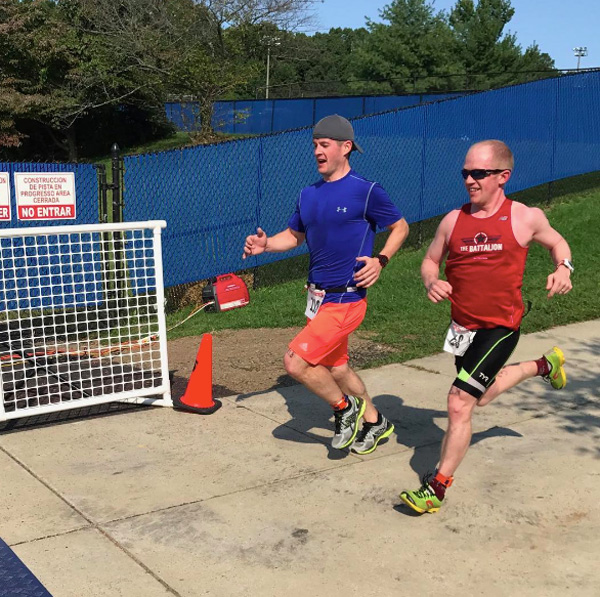 The Reston Triathlon website is down, more stats to come later.

We grabbed some food and then found our family. Back at Jeff’s we started making breakfast sandwiches to refuel as it was early. I was close to being Code Red so when the food was finally ready I inhaled mine!

That afternoon was spent celebrating over at my Bonus Mom’s house with everyone. It was a hard earned medal and a fun race. 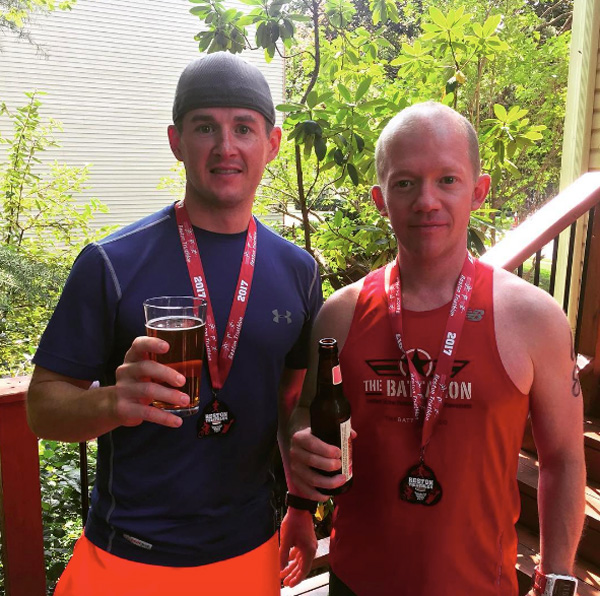